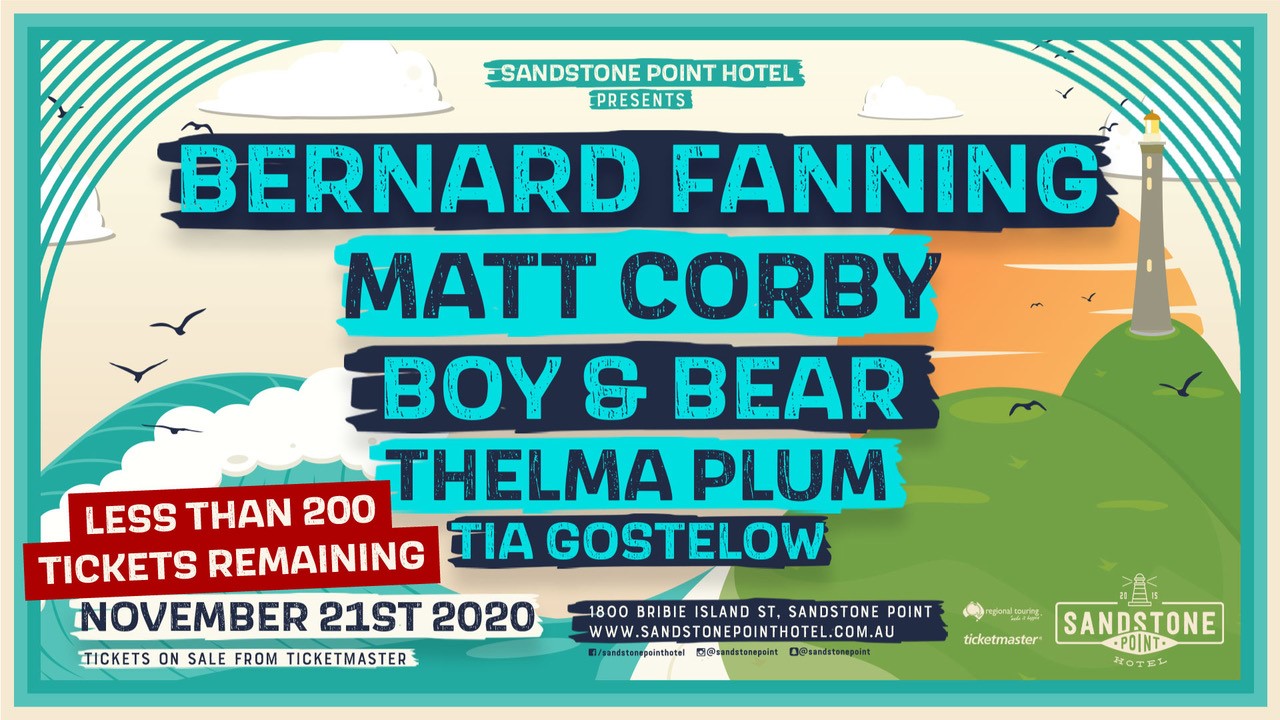 Hosted on Moreton Bay’s most iconic waterway, Pumicestone Passage, there’s no better backdrop to enjoy a Queensland spring with some of Australia’s biggest talents at the multi award-winning venue.

With all artists on board and available to hit the coast of Queensland, Sandstone Point Hotel is set to give eager music fans a concert well-worthy of being one of the first in Australia since COVID-19 began.

Sandstone Point Hotel Director, Rob Comiskey is glad to see the return of live music to the venue.

“It has been a rough six months since our last concert prior to COVID in February. The entertainment and hospitality industry have been hard-hit. With the announcement of outdoor events going up to a two square metre rule and the expansion of the border bubble, we have been able to put on such a cracking line-up! I am excited to see live music return to the venue” says Rob.

Headlining Sandstone Point in November, Bernard Fanning has accumulated one of the most celebrated and distinct songbooks on the Australian rock spectrum. A multi – award winning and platinum selling artist, his solo career now spanning 15 years, Fanning has firmly cemented his position as one of Australia’s finest songwriters and lyricists. From the country folk-tinged charm of his multi-platinum debut solo album Tea and Sympathy to the rock grooves and horn breaks of its follow up Departures and the exquisitely crafted Civil Dusk / Brutal Dawn – a 2 part album series released across 2016 and 2017. Bernard’s signature voice will deliver beloved and timeless hits such as “Wish You Well, “Songbird” and more along the stunning waterfront, beneath the stars at Sandstone Point Hotel in 2020.

Making his debut at the iconic venue, Australian singer-songwriter Matt Corby will be bringing his indie-rock folk sound to the stage for one mesmerising performance of gospel vocals and instruments. Since his commercial breakthrough with his fourth EP, Into the Flame in 2011, Matt Corby has become a multi ARIA award-winning artist most-known for hits “Brother” which won Song of the Year and more recent singles “Miracle Love” and “All Fired Up”.

Joining Bernard Fanning and Matt Corby is Australian 5-piece indie-folk band Boy & Bear.  2019 saw Boy & Bears triumphant return to the international touring circuit to promote the release of their 4th studio album ‘Suck on Light’ which was rated by triple j’s Richard Kingsmill in his top 10 albums of the year. Celebrated for their unique sound, rich harmonies, and trademark warmth and charisma, Boy & Bear take to stages around Australia this summer delivering the musicianship and connection that their live audiences have come to love throughout their career.

Brisbane-born Aboriginal pop queen, Thelma Plum will be bringing her sublime vocals to Sandstone Point Hotel for the much-anticipated concert. After her debut album, Better in Blak was released in 2019, Thelma Plum became an instant radio success. The album peaked at no.4 on the ARIA Albums Chart and in January 2020 Plum became the highest ranking Indigenous artist ever in the Triple J Hottest 100 when Better in Blak charted at number 9.

Bringing her angelic vocals to the shoreline is Mackay-born Indigenous singer-songwriter, Tia Gostelow. In 2018 Tia obtained a Triple J album feature and recorded a Like a Version after her debut album Thick Skin received notoriety across the globe. Since moving to Brisbane, Tia has become well and truly engrained in the city’s music community supporting the likes of Ball Park Music and The Rubens. Listen to hits “Strangers” and “State of Art” live this November.

With a number of successful QLD Health approved CovidSafe events already under their belt, Sandstone Point Hotel are well-equipped to ensure the concert is not only fun but safe too! Head to the bay for an afternoon of glistening water-views, coastal sounds and live music in the sun. Tickets are expected to sell out, get yours quick! 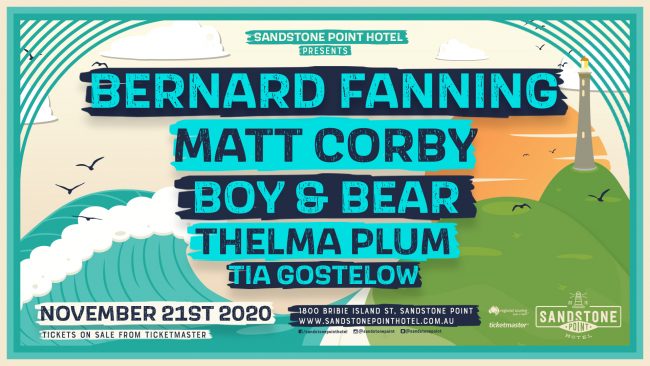